1X2 Gaming’s Keno Kick Off is a classic football themed keno game – simple and tame, but with the potential for some major payouts. Set within a soccer field, with supporters cheering you, you get to select your numbers (just like in any regular keno game) but will have players and footballs reveal if the winning numbers match your chosen numbers.

Where to play Keno Kick Off online

Keno Kick Off rules and how to play 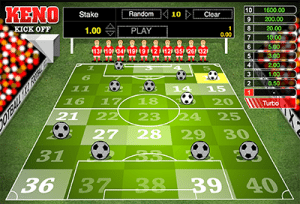 Once you have opened the game in your Web browser, you will be directed to adjust your stake and then can select however many numbers you wish, up to a maximum of 10. Numbers 1 – 40 are displayed on the soccer pitch – simply click on them to choose them (and again to remove your selection).

The total stake value is very flexible, and includes the following options:

A total stake of $1.00 will return the following pay outs if a total of ten numbers are selected (hits refer to your numbers matching the revealed numbers):

You have the option to play in ‘turbo’ mode which will speed up the round (players will run on to the filed much faster). The ‘turbo’ button is located below the pay table.

Australians aged 18 years and older can legally play Keno Kick Off for real money at Emu Casino. Emu Casino is licensed and authorised by the Malta Gaming Authority and the Government of Curacao. It is also regulated by the independent player protection and fair gaming testing agency, eCOGRA (the eCommerce Online Gaming Regulation and Assurance body).

Emu’s also owns a mobile/tablet gaming platform, with more than 200 of the most popular titles optimised for that platform. Games retain the high quality graphics, visuals and audio. All games, which use the latest browser-based technology and formatting, can be played directly via your Web browsers (also known as instant play), on desktop, laptop, mobile and tablet devices – no installations are required.